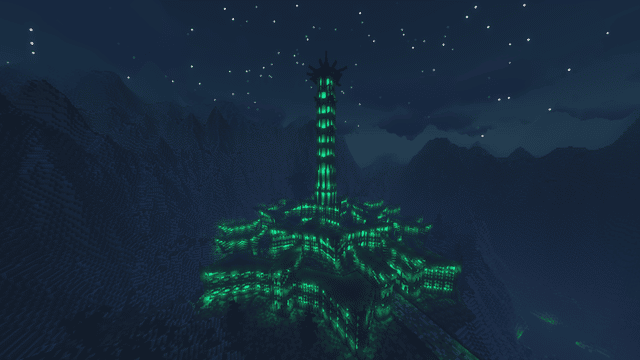 The player showed off his new project on Reddit: a beautiful Minecraft version of Minas Morgul, one of the scenarios featured in the Lord of the Rings movies and books. With great diligence and the help of a shader, the player has reproduced one of several iconic locations from the work of J. R. R. Tolkien. Minecraft has a survival mode with RPG elements and sandbox exploration that immediately reminds you of LEGO bricks. While the survival mode is beloved by the community, what attracts Minecraft players the most is the game’s creativity.

With creative mode and hundreds of mods that add various features, Minecraft players can create almost anything they want in the game. And one Minecraft player in particular brought one of the locations of one of the fantasy genre’s most beloved works into the world of Mojang.

Minas Morgul in Minecraft has been recreated with shaders and mods

Reddit user ImErik50 posted his version of Minas Morgul from The Lord of the Rings to the Minecraft subreddit. In Tolkien’s work, the city was formerly known as Minas Itil and was a beautiful place lit by silver moonlight, from which the streets and houses seemed to shine. Being very close to Mordor, the city was the object of many attacks, and in the Third Age the city became an evil place and its name changed to Minas Morgul, which means “Tower of Black Magic” in the language of Gondor. “Minas Morgul is one of the places in Middle-earth that is only explored in games, especially in Middle-Earth: Shadow of War.

This open-world RPG comes to life with an expansion of the award-winning Nemesis system.

The images posted by ImErik50 show tall and imposing structures and a large bridge. The fact that the player took images of their version of Minas Morgul at night further enhances the resemblance to the original version. In the comments to the post, the player explained to Redditor that they used Sildur’s Vibrant Shaders to achieve the lighting effect. Shaders in Minecraft change the gameplay, and this case is no different.

Minecraft was released in 2011, and while it’s an “old game”, the Mojang title has also kept up with the technological evolution of the video game industry. Minecraft mods, which were already creative from the start, have begun to add more and more complex features in terms of gameplay and visuals, allowing the player to create complex structures such as cities and train stations, or add physics to Minecraft and other even more creative mods. With so many creative options, the Minecraft player community stays active and creative and creates content that amuses and surprises.

Give free rein to your imagination

Minecraft is an open world building game created by Mojang Studios where players interact with the world, collect resources, place and break various types of blocks in a 3D environment. In this environment, players can create creative structures, creations, and artwork on multiplayer servers and single-player worlds in a variety of game modes. The game is available for PC, Xbox 360, Xbox One, PlayStation 3, PlayStation 4, PlayStation Vita, Wii U, Nintendo Switch, New Nintendo 3DS, Windows Phone, Android and iOS.

So do you play Minecraft? Built something impressive? Do you know how to make a circle in the game? Let us know in the comments! Now that you know how to install mods on