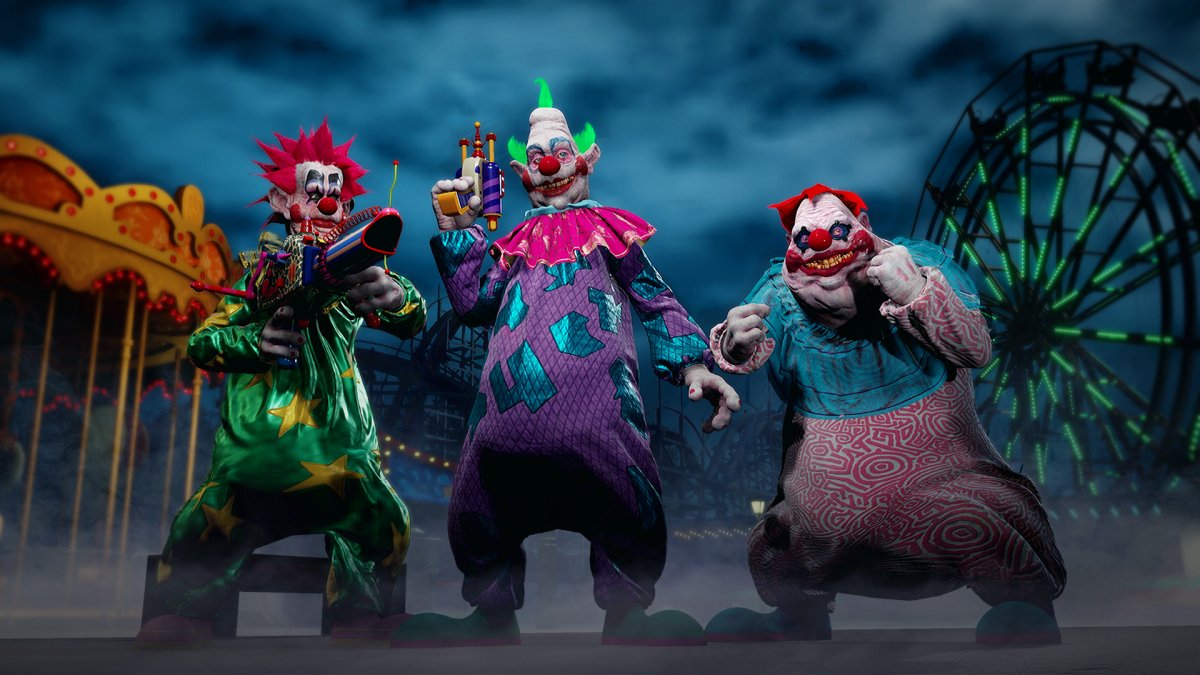 Friday the 13th: “Friday the 13th was insurance, but Killer Klowns will be on fire,” says Randy Greenback, a former developer of the Game, and is currently working on a similar take on another ’80s horror classic. A low-budget movie made by the Chiodo Brothers, Killer Klowns from Outer Space is exactly what the title suggests. Clowns are killer aliens who look like scary clowns (even their spaceship looks like a circus tent) and come to Earth only to capture humans, trap them in cotton candy cocoons, and use straws to suck their blood. If it sounds worthless, meaningless, and uncomfortable to you, that’s exactly what makes it unique.

L’A preview of Killer Klowns from Outer Space: The Game It will explain exactly how the authors took this premise and turned it into an online multiplayer video game whose goal is to use creativity and teamwork to capture humans as Klowns or get rid of the cursed alien clowns once and for all.

Even though the killer Klowns from Outer Space is in the hands of a very different team, Randy Greenback doesn’t hide what the clear starting point was for the new project to happen. When we met him at Gamescom 2022, the developer mentioned Friday the 13th: The Game several times to highlight the (many) similarities between the two games and highlight the most important differences.

Like Friday, Killer Klowns is a asymmetric multiplayer gameThat seven human players must work together to survive the threat of three dangerous Klowns, who take turns being controlled by a second team.

But the first major difference lies in the number of players on the bad guys side. “The player who controlled Jason on Friday the 13th was alone against everyone,” says Greenback. “It was a huge responsibility for one person and you had to be very good to have a chance to win. On the other hand, in Killer Klowns you can play a little more comfortably and play a little more comfortably if you are not particularly skilled. A Klown, you can always rely on your teammates”. However, dodging three enemies instead of one changes the alertness and anxiety levels of human players. “If you see Jason attacking a teammate on Friday the 13th you’ll be worried, sure, but at least you’re calm because you know he’s far from you. There are three enemies in Killer Klowns, and even if you see one or the other two away, the third person is always behind you. it could be”.

Can choose between both Klowns and human players five different classes, each characterized by special abilities and strengths. For example, the tracker can reveal hidden areas of the map and allow companions to track people; Instead, the tracker can use a small drone to survey the environment or inflate a balloon, give it the shape of a dog, and send it in search of the nearest enemies. There’s even an invisible car that you can use to quickly flip the map and crush other players. “If you want, you can inflate a dog balloon and take it with you as you drive around in the invisible car,” Greenback adds. “People can still blast the dog from afar. That sounds a little bad, but the game is full of goodies like this.” It’s a similar talk for people who can control the young (more sneaky but less resilient), punks (more agile), cops (more effective at guns), bikers (loud but noisy), and ignorant (able to carry more stuff).

Regardless of its class, every Klown is equipped with a pistol that traps humans in a cotton candy cocoon, ready to be picked up and transported to the spaceship. When you are paralyzed inside a cocoon, you are not idle: the player can decide to die instantly (but by giving their opponents a point) or try to ask other players for help by making noises and fidgeting. It may attract the attention of some clowns nearby. If he has a knife in his hand, he may eventually try to free himself.

At this point you’ll know where it’s going: Clowns win the game by capturing or killing as many people as possible; conversely, if they manage to get rid of most of Crescent Cove’s inhabitants, escape the map, or disable the opposing ship, the round goes to the Earthlings. Each match has a fixed number. citizens scattered around the city and controlled by the game, but when a human player dies, he may decide to return to the game as one of the remaining citizens. As a result, Klowns can begin hunting and killing all game-controlled inhabitants to immediately limit the number of respawns available to human players.

At the end of the meeting, the development team also talked about their plans to support the game after the official launch. “There first season 1988 will be set in the United States, but with the next we will explore other places and other eras, “Greenback tells us.” We have some crazy ideas and there will be updates that will make people wonder “where”. Have I been to hell?’ “Okay, when are the Pagliacci murderers in feudal Japan?

Despite being completely remade on Friday the 13th, Killer Klowns from Outer Space is trying to capitalize on an odd but not-so-well-known license to propose an asymmetrical multiplayer game that is slightly different from its main inspiration and has its own identity. . It may not necessarily be a success, but for some, the imaginative frenzy and comedy may be enough to turn them into a cotton candy cocoon when the game launches on PC, PlayStation, and Xbox early next year.