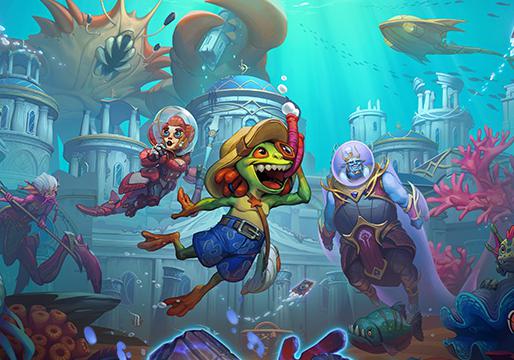 Blizzard has announced Hearthstone: The Sunken City, the first 2022 expansion of the popular card game, for PC and mobile systems. The pack of 135 new cards already has an official release date: April 12, 2022.

Let’s watch the video of the Route announcement for the Sunken City:

What is hiding under the surface?
Players will join a group of intrepid explorers on an expedition to the ancient city of Zin-Azshari, lost in the waves 10,000 years ago. New adventurers and veterans will experience a beautiful yet eerie world, all as they use deck-changing abilities and powerful new cards to use in battle against fearsome new minions to survive in the Sunken City!

New minion type: Naga – The vengeful naga, destroyed by their thirst for power and cursed forever, is a new type of minion coming with this expansion and will be a permanent addition to Hearthstone. Nagas are skilled minions with Spells that usually give you a bonus when you play one or more Spells from your hand.

New skill: Scan – Isn’t it hateful when the only card you need is right at the bottom of the deck? No more! Scanning is a new skill that lets you look at the bottom three cards of your deck and choose one to put on the top. You can combine the hatching cards with the new Azshara cards that place a powerful “Soaked” card at the bottom of your deck. Whether it’s sunken treasure, your new Legendary card, or a perfectly timed Spell, Scan can give you what you need.

New ability: Colossus – The depths of the ocean are home to many gigantic monsters unlike anything you’ve seen before. These giant creatures are too big to fit on a single card! Colossus minions appear with additional extensions that work in synergy with the main board in various ways. These extensions are summoned with the main card, even if the Colossus minion is not hand-played.