Review of Kena: Bridge of Spirits – a game that looks like weasel 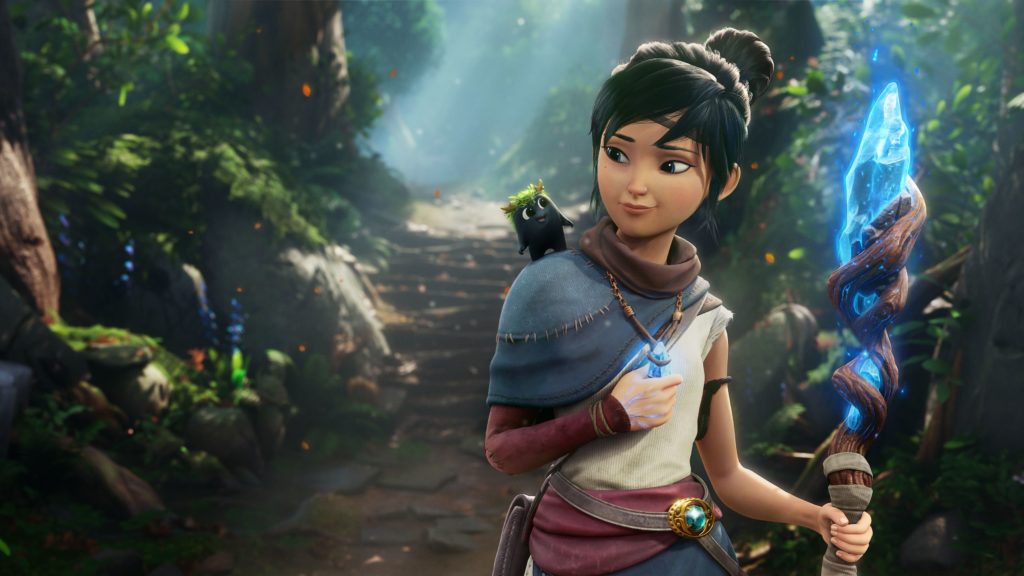 Kena is a game that has fascinated everyone since the first demo, the first picture. Few works will be so visually exceptional and at the same time pleasing that they will captivate literally everyone at first sight. But Ken did it most likely because while it’s the first game of 14 American studio Ember Lab (based in Los Angeles, near Hollywood), the individual creators have years of experience working with CGI and animation in non-standard formats. – game projects. The resulting game, in fact, is perhaps even more impressive than the trailers promised. But how well does he play?

The game world that you enter is incredibly beautiful – not only technically, but also especially aesthetically. Before you opens a vast landscape with mountains, forests, glades, waterfalls and several cute villages. All of this is heavily biased towards Asian spirituality such as Buddhist temples and communities. The beautiful nature around you directly invites you to meditation, along with beautiful but always moderate music, almost every playthrough (except combat) feels like a walk in paradise. Today it is not difficult to find games with a very impressive visual design. But it’s hard to find a game that looks so beautiful at the same time. You just don’t want to leave this world.

In such an unusual environment, it must have been difficult to create a “custom” main character that would fit into this unique atmosphere. But even the creators clearly succeeded, because the main character Ken is one of the cutest and dearest personalities that you have met in games for a long time. Aside from her adorable looks and turbulent “guide of souls” story, Deva Ayu Devi Larassanti, daughter of the directors of Bali Music and Dance Group (also featured on the game’s soundtrack), is certainly a huge part of it. this is the first big role. Maybe that’s why she’s so natural and human, which, along with her profession as “someone who helps lost souls find their way,” makes her one of the most beloved video game characters in a long time.

The game world you enter is incredibly beautiful.

Spending time in such a wonderful world with such a sweet heroine is a pleasure, so it is not surprising that instead of chasing the story, many players switch to finding and enjoying every corner of this extraordinary environment: for which they are rewarded not only by improving their character (meditation). places increase health , you can invest extra points in a larger energy shield or advanced Kenya abilities) but mainly by finding “Kaziks”, cute black creatures that will accompany you and gradually grow from a handful into a large flock (exactly 100 are hidden in the entire game), which you can dress up in cute hats. No wonder the game is compared with the wonderful anime film “Road to Fantasy”. If you choose to explore and find every corner of her world, you can easily spend twice her normal playtime playing through the game, which is twenty hours instead of ten.

Combined with what has been written above, this is all the more fortunate that the developers have also managed to come up with a combat system that will not be ashamed of any much larger and more expensive adult video game. Here you’ll find a solid mix of hard hits, fast hits, cover and counters, as well as combos, special spells and/or archery or energy bombardments. Everything is clear and beautifully controlled, although it can take some time to get used to the certain pace of the stylized character animations. Thanks to well-dosed fights with relatively diverse types of enemies, you will get real pleasure from duels, of course, given the difficulty you have chosen. For the less experienced, this is the easiest of the four difficulties, while even the tallest veterans can get stuck on the highest.

But where the action-packed gameplay really excels is in the boss battles. Again, where a number of much larger and more expensive games have failed miserably, Kena has come up with some bosses that will surprise you with their appearance and behavior, and their defeat will make you feel as good as solving a fun puzzle. Perhaps the biggest compliment I can give this “family” game is that some of the bosses are reminiscent of Returnal or even Dark Souls. An important part of the combat dynamics is the use of your group of Kaziks, which further builds and strengthens relationships with them, which is very important for the game’s story. In addition to a great experience and fun action, Ken also offers a simple but very successful story about the harmony of man with nature and respect for the natural order of things, including life and death.

The action gameplay is excellent in boss battles.

We bring the review a little later, because the review codes themselves came later. So in the meantime I’ve had time to catch the reaction of some players and sometimes I wasn’t surprised. Some have accused the game of being the traditional action-adventure template we’ve known in the genre for decades. I don’t see what’s wrong with that: obviously it’s a game aimed primarily at kids and younger players with little video game experience: getting more mature might seem like a great lesson. The combination of traditional jumping, climbing and fighting definitely suited me better than the obviously stalled development of the wonderful competitive game Everwild, which “banned” the use of traditional game mechanics and fighting. If the game design is to be blamed, then it will be random wandering due to the fact that navigating the map will show the destination, but the path to it leads to an unexpected detour. Alternatively, I’d like to learn more about Kenya’s past, which, ironically, doesn’t have as much of a place in the game as the story and past of the other characters. Maybe that’s why the story didn’t seem closed enough to anyone. But the last thing I understand from the criticism of some players is the regret about the brevity of the game. The fact that this is an indie title from a small independent studio, on top of their first, is absolutely incredible how narratively and polished the title is.