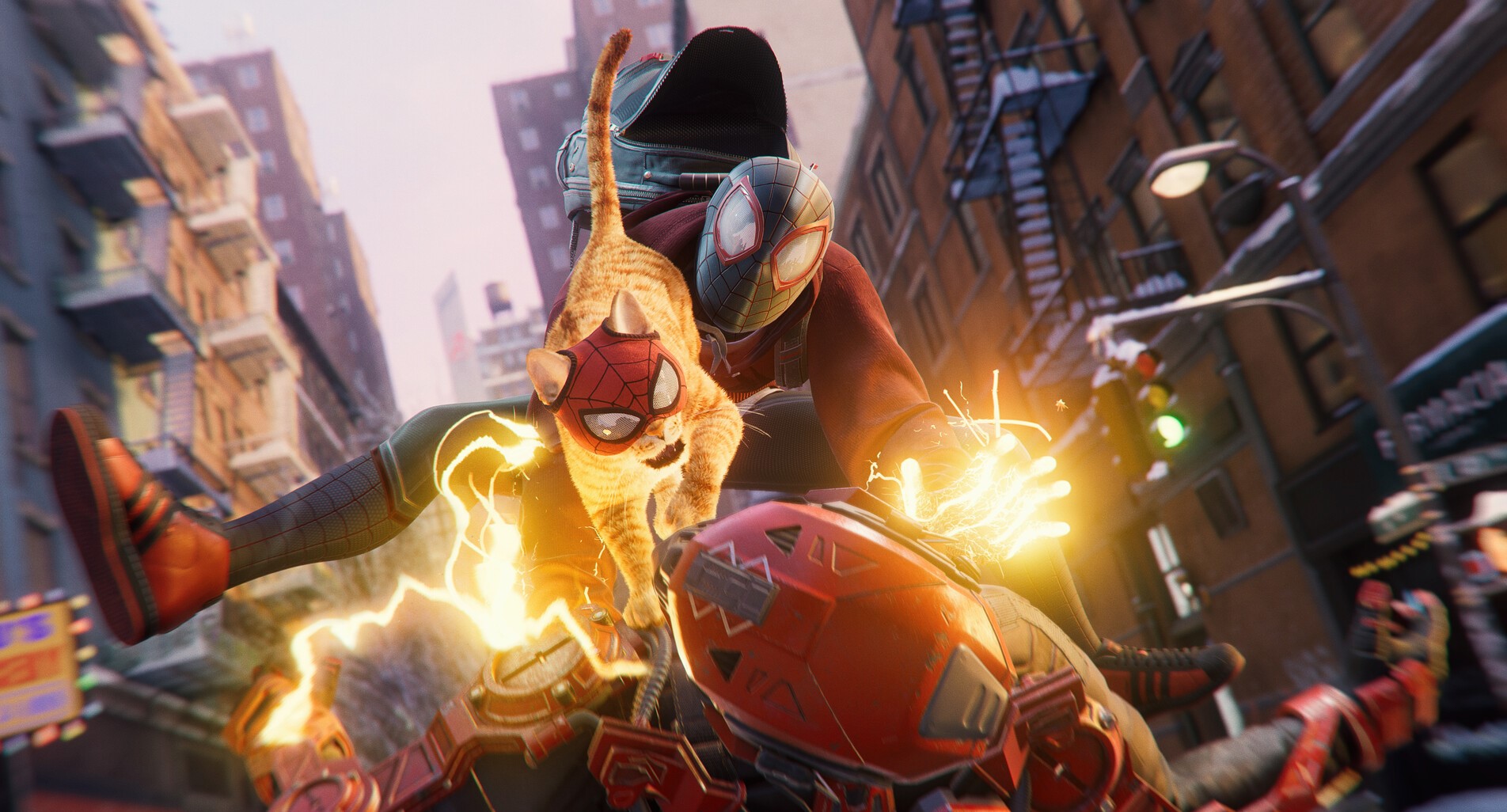 Miles Morales was an ordinary man. But then the struggle of Peter Parker intervened in his life and changed it one hundred and eighty degrees. Now, like one of the youngest Avengers, he’s a superhero with a lot of work to do on the streets of Manhattan. This city is just full of crime that cannot be eradicated, so this young man will have to deal with it along with the original Spider-Man. So far, he has played second fiddle. But now it’s time for Marvel’s Spider-Man Miles Morales to dive right into his work, because everyone needs to take a vacation from time to time, and his mentor Parker is no exception.

Just like in the original, Miles Morales must cope with what life as a hero brings without losing the existence of an ordinary teenager. His fight against villains is, like the storytelling of Marvel’s Spider-Man, a popcorn ride that won’t let anyone breathe for a second. Interesting characters appear on your way. You build relationships with them and gradually figure out who is on which side. The story is very strong again, which is no exception to the rule for Insomniac Games.

In terms of pacing, Miles Morales is much more intense in Marvel’s Spider-Man than he is in Marvel’s Spider-Man. For some reason, the creators are counting on the fact that the game will be played mainly by players who have already passed the history of an excellent adventure action movie with Peter Parker in the title role. Thus, from the very beginning, you advance through the narrative at such a speed that the previous one will seem unusually slow. At least that’s how I perceived it while playing. The length of the campaign might be a problem for some, but I didn’t have much of a problem with it myself because the length was replaced with more intensity.

This time, Spider-Man has become a big pest.

The forte of Miles Morales’ entire Marvel Spider-Man story is Miles himself. On the surface, he seems like just another Spider-Man, but shortly after launch, he’ll show you that he brings a few moves to the fight that Peter Parker didn’t have. The main one, apparently, is a bioelectrical superpower, with which he can, after a certain number of hits, deliver a cannon blow to his opponents, which none of the struck ones will easily forget. Of course, the young man has more abilities, but I don’t want to spoil the surprise for you, so I leave their discovery entirely up to you.

Again, there is plenty to do in the giant metropolis. This time it’s covered in snow, but if you played the first story starring the original Spider-Man, you won’t get lost here, as it’s pretty much the same playground as last time. Once again, you will be able to hunt down criminals, search for hidden objects, solve audio puzzles and complete a wide variety of tasks, thanks to which you will not have time to get bored. In addition, all side activities are presented in the mobile application, so you really feel like a young man who never leaves his phone.

As before, development is associated with overcoming various trials. However, the speed at which you improve seems to be much more intense than in the past. Miles will be able to use his newly acquired equipment and abilities to quickly overcome the distance, and to eliminate opponents. The base set of enemies is relatively poor, and the range of bosses is not the most diverse. Given the ability of the youngster, I could easily imagine that I would have to face a more diverse range of opponents from the big leagues. This shortcoming is, in fact, the only thing I can complain about. I’m a big fan of challenges, and for me, at least, it’s the wasted potential of a young hero and his skills.

In the case of Marvel’s Spider-Man Remastered, I have already praised Nixxes Software for how well they managed to optimize. I really have nothing to say about their latest work. On my machine with an AMD Ryzen 7 7700X, GTX 1080 Ti and 32GB of RAM, it ran without problems or fps drops on high settings, with all the settings that belonged to it. So the FPS lock remained unlocked without restrictions.

The setting itself was almost identical to what the previous Spider-Man offered me, so I was given a lot of options. Among the many options, you can find the inclusion of reflections, defining the quality of shadows, or increasing the depth due to ambient shading. There are also games with light, the details of the game world, or the density of the streets. There are many opportunities for adjustments. But once you get down to business, you must take into account that your actions can affect the smoothness of the game. At least on older machines. However, I did not observe sharp jumps for myself.

The game world is crafted very well, so you really enjoy every detail you come across while playing. Pedestrians, together with the functioning weather, create a city teeming with life that is sure to be explored. In addition, the graphic side is strong not only in the open world, but also in the character design, the detail of which you enjoy during the conversations that take place during the game. The only thing I can’t review due to my card are the RTX features, which I unfortunately didn’t have access to.

If you’ve played Marvel’s Spider-Man Remastered, you probably won’t be surprised by the inability to reset some keys and modify gadgets. However, thanks to Miles’ ability, the game can be played very effectively on both a controller and a keyboard and mouse, which is a welcome find as, at least for myself, I ran into issues with traditional PC hardware that ended up led me to resort to my Nintendo Switch controller. Overall, Marvel’s Spider-Man Miles Morales is optimized to number one and I can’t fault him for that.

Is this another success?

Like its predecessor, Marvel’s Spider-Man Miles Morales is a hugely successful game that brings you popcorn history in doses that the original game avoided. The trade-off for this is shorter playtime, which reaches up to 9 hours of story-focused play, which isn’t much for an open-world title. The settings are the same as in the past, so we have a giant city full of challenges and slightly repetitive action.

The hero is wilder and, above all, better equipped, which can be said already in the first minutes of the game. His abilities are a breath of fresh air that speaks volumes. Graphics processing together with optimization is again brought to the first level, to some extent the number of fast time events has also decreased, or at least within the tempo they are not such a frequent occurrence. I would definitely like more boss fights, which there aren’t many. For some owners of the first game, the higher price, which differs from the original by only a few hundred crowns, can also be a problem.

The game has been reviewed on: